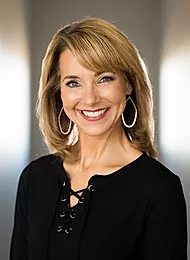 Kim Rhodenbaugh Lewallen is a former competitive swimmer who competed in the 1984 Olympics in Los Angeles in the 200 meter breaststroke. She was also a five-time Senior National Champion in the breaststroke and a double-silver medalist at the 1982 World Championships in Guayaquil, Ecuador.

While at the University of Texas, Kim received a degree in Speech Communication, was an All-American, and three-time NCAA champion.

Growing up in a large family with seven siblings ̶ who were all swimmers ̶ Kim had the goal of making it to the Olympics even as a small girl. She continued to stay active in swimming for nearly thirty years as a coach and an instructor. She is a motivational speaker, writer, and the founder of Freedom Now, a non-profit organization focusing on bringing hope and encouragement to sexual assault victims.

Kim married Nolan Lewallen in 2016, and they live near Stephenville, Texas. Together, they have seven grown children and four grandchildren.

Would you like to be updated on our events and promotions?

Please let us know by providing your name and email below.

Your information is private and will never be sold or shared.